Activities along the Delaware River

Situated on Front Street, the Waterfront II has a variety of waterfront apartments available featuring spacious floor plans and luxury apartment amenities. Living here you’ll enjoy priceless views of the Delaware River and the City of Brotherly Love. There are plenty of things to do near our waterfront apartments—we are nestled in the beautiful Old City section of Philadelphia, which is rich with history and unbeatable culture.

Old City is one of the country’s oldest yet most vibrant neighborhoods. Holding the stories of our founding fathers, our apartments near Penn’s Landing are surrounded by original architecture and charming cobble stone streets. The Waterfront II is close to Philadelphia’s historic icons that have evolved with the city and some of the hottest modern attractions.

Penn’s Landing in Your Backyard

Our waterfront apartments in Philadelphia are just steps from Penn’s Landing. Commemorating that landing of William Penn in 1682, today Penn’s Landing is a seasonal, waterfront gathering space for the people of and visitors to Philadelphia. According to historical writings, in 1842 Penn’s Landing was a “web” of wharves and commerce. In 1967, the city began a plan to develop the landing’s decrepit docks in a recreational park. During this time walkways were added, the amphitheater was built, trees were planted, and a sculpture garden was erected.

This gem of the Delaware River waterfront balances history and entertainment. Founded in 1961, this maritime museum houses information and relics from the history of the Delaware River and beyond. The museum is home to two National Historic Landmark ships—The USS Becuna, a World War II-era submarine, and the USS Olympia, a Spanish-American War-era cruiser. Penn’s Landing hosts a variety of events during the summer months, including concerts, private events, and festivals. And if you are looking for something a little unique, visit the Moshulu, a modern-day floating restaurant housed on a barque sailing vessel.

One of the most popular warm-weather attractions in Old City, Spruce Street Harbor Park is an annual summer pop-up and dubbed one the best urban beaches in the country. The park opens each summer featuring a refreshing craft beer garden and food from popular Philly eateries. You can even chill in a net set out four feet above the Delaware for a true on-the-water experience or relax in one of the hammocks under the trees. Spruce Street also features a boardwalk with outdoor games like ping pong, shuffleboard, and bocce courts. The park also hosts special events throughout the summer like screenings, art shows, and flea markets. Enjoy fun in the sun right in your “backyard.”

This multi-season waterfront venue offers fun for Philadelphia’s visitors and residents nearly year-round. When the BlueCross RiverRink Winterfest comes to Philadelphia, residents of our waterfront apartments can take advantage of a ski-chalet inspired lodge and outdoor seating area with fire pits. During the warmer months, you’ll enjoy the Blue Cross RiverRink Summerfest. Strap on some skates and enjoy Philadelphia’s only outdoor roller skating rink or enjoy mini-golf, games, rides, and concessions. 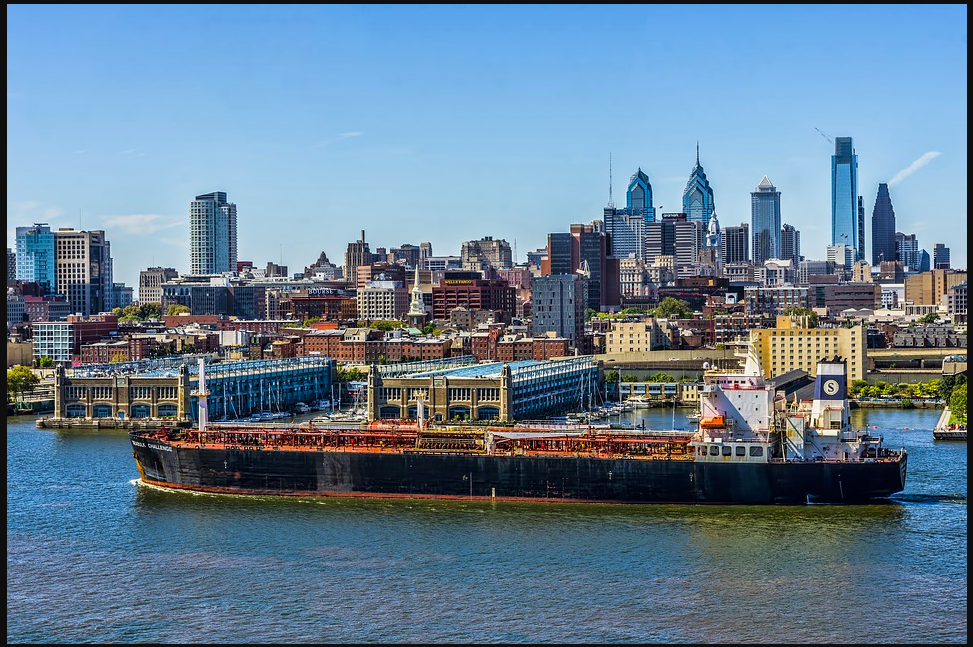 Across the Delaware River

Living in a waterfront apartment in Old City offers you a convenient commute to many attractions along the river in New Jersey. Just a 10-minute drive away from the Waterfront II via the picturesque Ben Franklin Bridge are the Adventure Aquarium, Campbell’s Field, and BB&T Pavillion. Seeking a more adventurous route? You can hop aboard the RiverLink Ferry. The ship leaves from Penn’s Landing and sails straight across the river, giving passengers spectacular views of the river on the way.

With more than 8,000 animals, Adventure Aquarium provides plenty of opportunities for both entertainment and education. It’s one of the region’s leading attractions! Interactive exhibits let visitors get up close and personal with the creatures, even allowing them to plunge their hands into the water and touch everything from stingrays to jellyfish.

The opportunities don’t have to stop when you leave the aquarium’s doors. There are many great attractions along the Camden waterfront. Visit Battleship New Jersey, a museum and memorial open for tours and events. Watch a Minor League Camden Riversharks game at Campbell’s Field. Buy tickets for some of the region’s best concerts and enjoy them from BB&T Pavillion, a 25,000-seat open-air theater.

Contact Waterfront II to learn more about our apartment rentals in Center City! Call our leasing office at 215-351-1535 to schedule a personal virtual apartment tour or FaceTime tour.